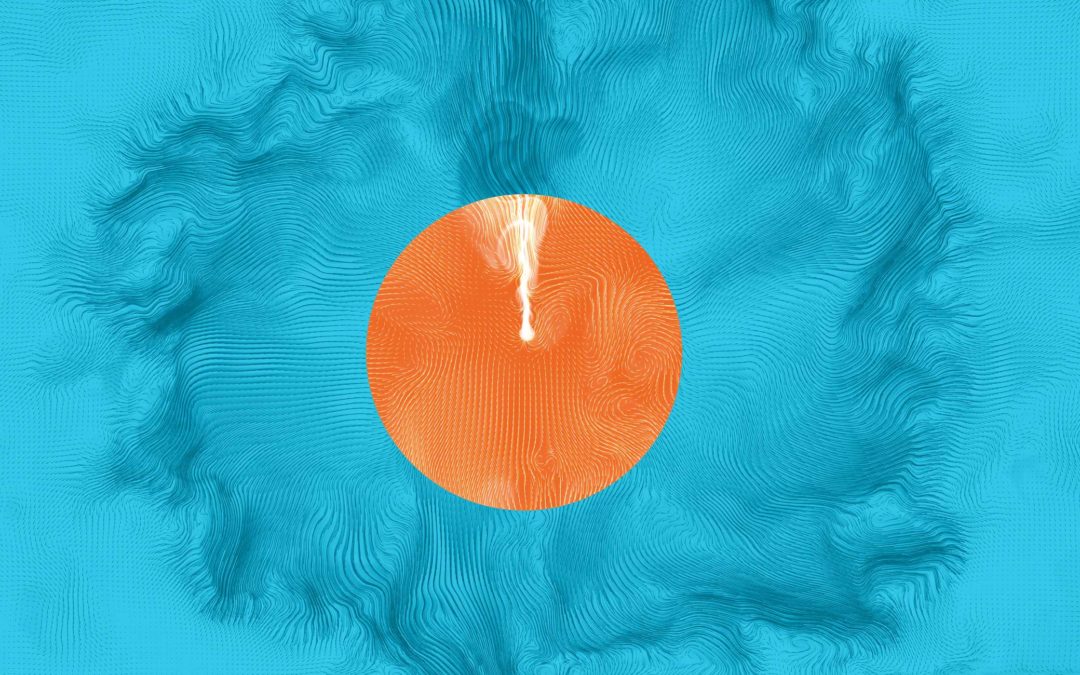 How do you take a scientific organization focused on the infinitesimal and brand it in a macroscopic way? That’s one of the latest questions we’ve been asking ourselves as we collaborate with the International Institute for Nanotechnology (IIN) at Northwestern University.

Nanotechnology involves the manipulation and study of materials at the nanoscale, which ranges from 1 to 100 nanometers. Nanometers are very small; a nanometer is one billionth of a meter, and one inch equals 25,400,000 nanometers. Observing matter this closely allows scientists to better understand the matter’s properties, which can exhibit very different behavior at the nanoscale. Because of this difference in behaviors, discoveries in nanotechnology carry major implications for everything ranging from the energy sector to electronics to the healthcare industry.

Above: An  imaginary visual exploration of the world of nanotechnology, inspired by real-world nanotechnology electronic images (see below for the real stuff!).

To support these discoveries, the International Institute for Nanotechnology at Northwestern encompasses “more than $1 billion in nanotechnology research, educational programs and supporting infrastructure.” This includes the Kabiller Prize, which was established in 2015. Every two years, the prize awards $250,000 to a scientist making major advances in nanotechnology, specifically in the areas of medicine and biology.

Initially, the IIN approached us with developing the mark for the Kabiller prize, and this first project later evolved into others, including creating the design for the trophy itself. From our experiences working with the IIN, we’ve learned a few key insights about branding a scientific organization. Whether you’re in the beginning stages of developing your brand or you’re trying to refresh your current branding, these tips can help you think through the process.

Above: An exploration of the Kabiller brand reflecting how different IIN Discoveries can be graphically represented and incorporated as part of a dynamic visual identity system. The main mark design is (3), a reference to Raman spectroscopy.

As we’ve written before, when you undertake any project involving your brand, one of the first things to consider is exactly why you’re setting a specific goal. You may want a new visual identity, but for what reason? Has your organization evolved, and your identity does not communicate that evolution? Has the focus of your products or research shifted? Have you noticed a fragmented approach to your various collaterals and communication materials? Maybe you need to appear more sophisticated to your donors or Foundations to support a fundraising campaign?

The end result of asking such questions might range from a redesigned logo to the creation of an entire brand ecosystem. In the IIN’s case, that ecosystem includes its mark, its visual identity and collaterals, the Kabiller Prize brand, and new signage for its various buildings on the Northwestern campus. While each of these elements had a unique design approach and development, all of them reflected a unified strategic approach under the “branded house” of the IIN. The logo incorporated the IIN’s identity as a Northwestern institution as well as referencing its own accomplishments. The prize design visually and conceptually embedded the Discoveries developed by the IIN. And the signage provided an experiential consistency across the Institute’s locations, which are dispersed across the university campus.

Above: Studio Pax created the design for the $250,000 Kabiller trophy design. Being able to clearly articulate how the design works prior to fabricating it is key to ensure a bespoke product of the highest quality for complex design deliverables. A diagram of the various crystal components and a 3D rendering of the prize prior to its fabrication help vizualize the fabricated design. The actual prize in the hands of Joseph DeSimone can be seen on the Northwestern Now website.

These concerted elements reflect a deliberate approach to branding, in contrast to the early days of the Institute. IIN Chief of Staff Kathy Cook compares the organization’s beginnings to a startup, focused on delivering results, and leaving precious little time to plan the brand growth strategically.

“We had to figure everything out really quickly and then just run with it…And it worked for us for many years,” says Cook. “But it was time to really think [our branding] through and have an approach that was more reflective of where we’re going now.”

Like the IIN, you may realize that your branding needs to be more cohesive or more reflective of your organization–but only after you’ve assessed how accurately your current brand reflects your company, your work and your stakeholders. If you notice a disconnect, the next two tips can help you strengthen this connection.

2. Showcase what makes you unique

Any discoveries or innovations that your company has made can be a good basis for visual inspiration. For example, to develop the mark for the Kabiller prize, we focused on three major technologies that the IIN developed: Raman Spectroscopy, Dip-Pen Nanolithography and Spherical Nucleic Acid.

Above: Various examples of proprietary nanotechnology discoveries associated with the International Institute of Nanotechnology.

Using scientific imagery from each of these three Discoveries, we created several mood boards and visual concepts interpreting the Discoveries for the Kabiller brand. We then incorporated the Discoveries into the design of the Kabiller trophy. You can use a similar approach to guide your own visual interpretation of your organization: seek, gather and organize images and terms pertinent to your field’s technologies, or created by your teams. Use the images and words to inspire your branding process. You may create a range of visual interpretations before you decide on the most promising options.

3. Consider your stakeholders as assets

Your stakeholders can help you uncover values that are essential to your brand. In our case, the IIN’s brand as a Northwestern institution played a key role in some of our design decisions. After the mark for the Kabiller prize was conceived, the IIN also asked us to design the Kabiller trophy. The final product referenced three foundational IIN technologies and paid homage to Northwestern’s educational philosophy.

Both jewel-like and scientific-looking, the Kabiller trophy is a rectangular prism, constructed of sapphire crystal. The marks representing IIN’s discoveries were strategically placed on the trophy’s faces so that no matter how you view it, the prize looks slightly different from every angle. This conscious choice reflects the nuanced and multifaceted education offered at Northwestern.

Above: a dazzling top view of the Kabiller trophy showing the reflections generated by the multiple crystal components of the trophy. With the help of Optics, your possibilities extend to the infinite when your eye captures the Kabiller Prize at the right angle.

The university also influenced the design of the IIN’s new logo, which we updated to reflect Northwestern’s branding guidelines and ensure consistency with the Kabiller prize mark. (These guidelines were created in 2015 to ensure more consistent branding across the university’s different schools.)

Your own organization may not belong to a university, but the broader lesson is that stakeholders are a good source of inspiration when learning who you are versus how you want to be perceived. Speak with your employees, researchers, partners, students, donors, etc. What do they see as the company’s most important attributes? What do they admire about the company?  How do they see it contributing to the scientific community, or to society as a whole? Asking these questions will provide valuable perspectives to guide you in the analytical and creative process of evolving a strategic branding approach.

Above: From a dedication panel to a lobby sign with custom wallpaper, we applied the visual language of Discovery patterns througout the IIN branding ecosystem in the physical environment on campus (Willens Center and the entrance to Ryan Hall, the home of the Nanotechnology Center of Fabrication).

In sum, there are a few key things for scientific organizations to think about in terms of branding. Your motivations for launching the project, your work and your stakeholders are all crucial elements to consider. If you need help thinking through any aspect of the branding process, feel free to reach out to us at Pax. We’d be happy to help you think through it, and help you discover your unique branding equation! A native Frenchman, Stephan was schooled in the Beaux-Arts design approach. He is passionate about studying how the Arts, Design & Technology intersect.

The Field Museum does something incredible:  a ticket there allows you to transcend the space-time continuum.
Read More.